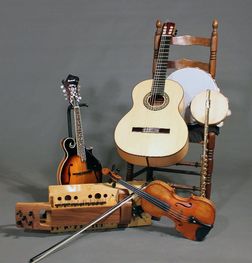 Celt Iberia has evolved from Spain's Celtic past. The provinces of Galicia and Asturias, in particular, and the other northern regions,  have their own music and dance forms, and regional dialects of Spanish: Galego and Asturianu.

In the 19th and early 20th Centuries, the basis of Spanish Celtic was the "gaita and tamboril," the Spanish bagpipe and drum. This music was performed at public festivals, ceremonies, government and private functions, funerals, and other events.  Spanish Celtic music evolved to include bagpipes, the zanfona (hurdy gurdy), flutes, voice, violin, percussion, and other instruments, whose histories go back further than the Middle Ages.  Today there are many groups in Spain dedicated to preserving and expanding this music throughout Spain and the world.

It may be strange to think of Spain as a Celtic culture but, the Galician and Asturian landscapes are dotted with pre-Roman archeological Celtic settlements, and this region of Europe was once populated by a people who spoke a Celtic tongue. These people were called the Iberian Celts. This is the origin of our musical group's name, Celt Iberia.